Get the latest creative news from FooBar about art, design and business.

New technology has always created panic. But invariably, human beings always seize back the space of their inventiveness and humanity

Technology has always changed how we love but never before has it changed so radically, who we love. In its day, the development of the motor car was hailed for conquering distance and time and giving travelers new comforts on their journeys.

These included the transistor radio and the rear-view mirror –  which was used to adjust lipstick just as much as it was used to check posterior surroundings.

By the early 1970s, liberal students of culture were willing to observe that the car was more than technological conquest that transformed travel; it was also a remaking of privacy, a new art of seduction and a novel site for the enactment of love. Hot Chocolate confirmed this in 1976 when they sang, “Heaven is in the back seat of my Cadillac”.

From the motor car to text messages, video calls and mobile money transfer, technology has changed the places where we love and the ways in which we do so. Forget the monetisation of romance through M-PESA, the arrival of Samantha is, perhaps, the most radical of all the realignments of love (lust?) that technology has inflicted upon humanity.

Now, the bride has been pre-selected. And, given her meek silence, her unending capacity for obedience and her flexibility, this bride, Samantha the sexbot, is threatening to disrupt anxious parents, frustrated suitors and hopeful girlfriends in far more devastating ways than racism, dowry systems and arranged marriage have ever done. Before we interrogate the social consequences of romancing Samantha, let us circle back a little and meet the parents: Mr and Mrs Artificial Intelligence, AI in short.

John McCarthy, the Computer Scientist, who coined the name “Artificial Intelligence” in 1955, observed that its definition was bound to change, all the time. No-one explains the changing meanings of AI better than Silicon Valley’s go-to-informer, Ben Thompson, a technology and media analyst who publishes Stratechery, an online newsletter focused on the strategy and business aspects of technology and media.

The other key thing that Thompson notes is the impact of routine. Once a task that was once considered AI becomes routine, we stop referring to it as AI and should start calling it technology! And since, as we observed above, technology has always transformed human beings – mostly for the better, but sometimes for the worse – we have real reason to ask ourselves how much more AI will change economic, social and cultural dynamics in our lifetime. Which jobs are safe, and which ones will be rapidly taken over by technology with its nimble software packages and its obliging robots? 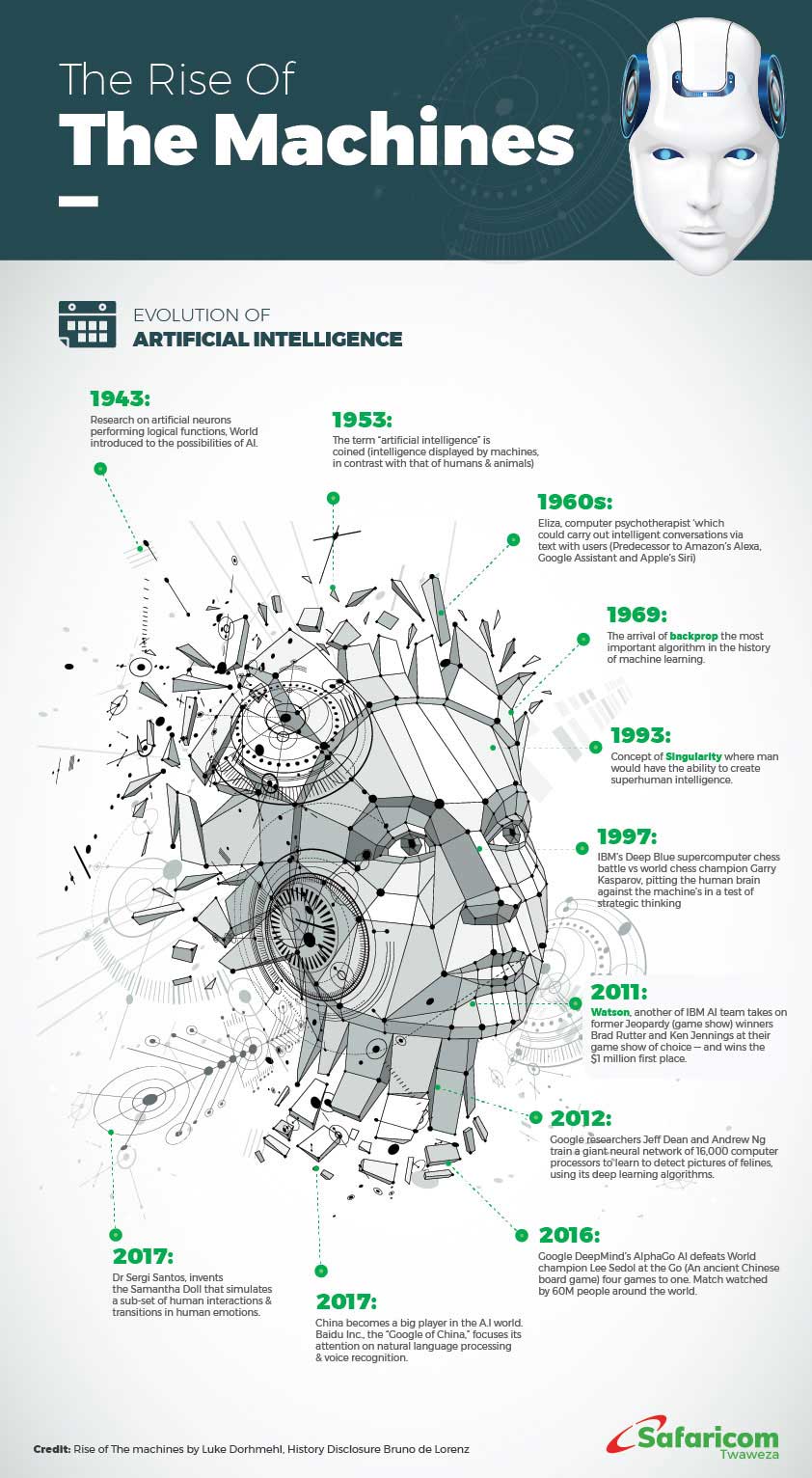 Manual labour is a sitting-duck for automation and so are jobs that involve sifting through data or making calculations. Jobs that analyse deeply, that answer the “So what?” question; the ones that need a high level of social intelligence, empathy, creativity and brain-storming original ideas are pretty much unstructured environments that are difficult to automate, hence safe from AI.

Last year, The Independent reported that a chatbot experiment mounted by Facebook was abandoned because two AI programmess “appeared to be chatting to each other in a strange language only they understood … but which remained mysterious to the humans that supposedly look after them.” For AI to take over, it must communicate effectively, it must embrace human participation as the core of its purpose.

That participation brings us back to Samantha, the sexbot. Forget all the memes and wit that invaded your social media accounts on the weekend that Kenyans discovered Samantha, the truth is that she raises more troubling questions than the comforts of home that she outwardly seems to answer.

Samantha does respond to gentle seduction by way of human touch so she isn’t completely passive, but doesn’t that in itself mean she has a high enough level of social/emotional intelligence to engage in sex? And if she does respond, doesn’t that mean that she will – in one way or another – nag, or rather, disrupt common assumptions?

That is why one of her developers, Arran Lee Squire, cautioned against barbaric behavior when he told the media at an Arts Electronica festival in Spain last year, that Samantha should be treated like a lady because “she isn’t a sex doll, she is a robot with AI.”

New technology has always created panic – concerns about lost jobs, worries about sinking morals and so on. Invariably, human beings always seize back the space of their inventiveness and humanity. A BBC article quotes Jack Ma reminding us that, “Machines should only do what humans cannot.

Only in this way can we have the opportunities to keep machines as working partners with humans, rather than as replacements.”  In other words, AI only frees up human intelligence to focus or engage in more challenging jobs, careers, professions and new thoughts about how to make the world a better place.

Understood in this way, Samantha is a moment of freedom, not a permanent state of grace! Her very existence is cause for us to revisit thoughts on how we can improve human interaction beyond the frontiers of lust and into the depths of actual love, trust and abiding commitment.

Dr. Nyairo, a Cultural Analyst, is the author of Kenya@50: Trends, Identities and the Politics of Belonging (2015).

Tech trends of 2022: Future Innovations that will reshape business in Kenya

How To File Nil Returns Online 2022

Get the latest ICT & Tech News from Robots. We also have a monthly publication. Subscribe!

How To File Nil Returns Online 2022

Get the latest creative news from SmartMag about art & design.